A History of Chapin

In the mid-1700s, when everything west of Columbia was frontier, a group of German settlers, many of them armed with land grants from the English crown, laid claim to the land between the forks of the Saluda and Broad Rivers. It came to be known as the Dutch Fork, the "Dutch" being an anglicized form of Deutsch (referring to the German language and people.)

Few of the Fork's German settlers ever left its boundaries, and even fewer outsiders ever came to stay. In the 1800's, Dutch Forkers had developed their own subculture, their own particular--some would say peculiar--ways. Some still spoke German well into the 19th century, and those who didn't, had a dialect all their own. They measured success not in money or fame, but in family and community ties. They were poor, but proud. They made the most of the little they had. They believed in hard work, in saving up for even harder times, and in a benevolent God.

Martin Chapin came to the Dutch Fork from Cortland, New York. He was a different sort than his neighbors, and yet he shared many of their attributes. He suffered a lung ailment, and his doctors had advised that if he expected to live, he should head south to the Piney Woods and inhale the pine. And that he did.

The pines were good to him, in more ways than one. He started a successful lumber mill business and invested in the land. Over the years his holdings increased to the point that, according to records in the Lexington County Courthouse, when surveys were being made and land purchased for the basin of the future Lake Murray, more than half of the property titles could be traced back to Martin Chapin, either directly or indirectly. County records show that he purchased 4,218 acres in the Chapin area.

He gave right of way for the Columbia, Newberry and Laurens (CN&L) Railway, which would help him get his lumber to market, and which over the years would have a tremendous impact on villages and communities throughout the Dutch Fork. When the railroad was built, a station was established near Chapin's Mill, and called Chapin.

With the railroad, businesses sprang up and prospered and then a town. Martin Chapin gave the land for its streets. And on Christmas Eve, 1889, with its limits to extend three-quarters of a mile north, east and west from Martin Chapin's house, forming a square, the Town of Chapin was incorporated.

In the years when cotton was king, Chapin enjoyed relative prosperity, but still did not look very far beyond the Dutch Fork. Then came the Great Depression, and many of Chapin's farmers lost everything they had when the Bank of Chapin failed. Times were hard.

But the greater impact on life in Chapin was not the Depression, but the coming of new technology -- technology that would expand the boundaries, that would open up the Dutch Fork to the outside world. The automobile, electricity, the telephone, radio -- they all played a part.

But nothing could have prepared these poor folks, who had lived and worked the land along the banks of the Saluda River for years, for the tremendous social upheaval that resulted from the damming of the Saluda River in 1927 to create Lake Murray, and a source of hydro-electric power for South Carolina's Midlands.

The lives of some 5,000 people were directly affected as land was acquired. Three churches, six schools and 193 graveyards were removed. To some, the building of the dam brought employment. New people moved in. New students from other sections of the country were welcomed into the schools. A new age had begun. For others, only memories remained of the lives they had known. For quite a few, the adjustment was impossible.

At the time of its construction, the dam was the largest earthen dam in cubical content for power purposes in the world. The dam itself covers an area of around 99 acres, it is 208 feet high and 1 1/2 miles long.

But for all of the upheaval it caused then, likely, few in the 1920s could have imagined the tremendous impact Lake Murray would continue to have today -- far beyond its original purpose of providing a source of electric power.

Today, the lake is a vast area of water covering 78 square miles and approximately 50,000 acres of land. At its widest point, it is 41 miles long and 14 miles wide, providing storage for 763 billion gallons of water. It is the jewel of the Midlands, a water wonderland for fishing, sailing, swimming, skiing, or just sitting on your back porch looking out over the water at a beautiful South Carolina sunset.

The lake today is one of Chapin's grandest assets, the lure that attracts people from all parts of the country, who are looking for a great place to live and raise a family. And Chapin is truly "The Capital of Lake Murray." 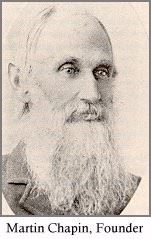